The Delaware Humane Association, The First Ever Indoguration™, and a New World Record for the Most Pets on a Single Zoom Call

When opportunity knocks, nonprofits need to be ready to answer the door and be open to the possibility of expanding their operations.

That’s exactly what happened when President Joe Biden arrived at the Delaware Humane Association to adopt a dog named Major.
With Major set to become the first rescue pet in the White House, the Delaware Humane Association, along with a few partners, began planning the first-ever Indoguration™ to take place as the President was taking his oath. Working with Pumpkin Pet Insurance, DHA hoped they could break a world record by having the largest pet zoom call by getting 1,000 people online with their pets. Their initial goal was to raise $10 from each participant, or $10,000 total.

DHA had been using Salsa Engage to keep track of supporters and advocates, so it was natural for them to turn to Salsa Smart Engagement Technology to handle the online fundraising component for their Indoguration™ campaign.

DHA created a simple, but effective donation form using the Salsa Engage fundraising platform for nonprofits which included a short statement on the Indoguration™, a picture of Major Biden, and social media information for further engagement. Their campaign also highlighted DHA’s local shelter programs and brought much-needed attention to other shelters around the country. 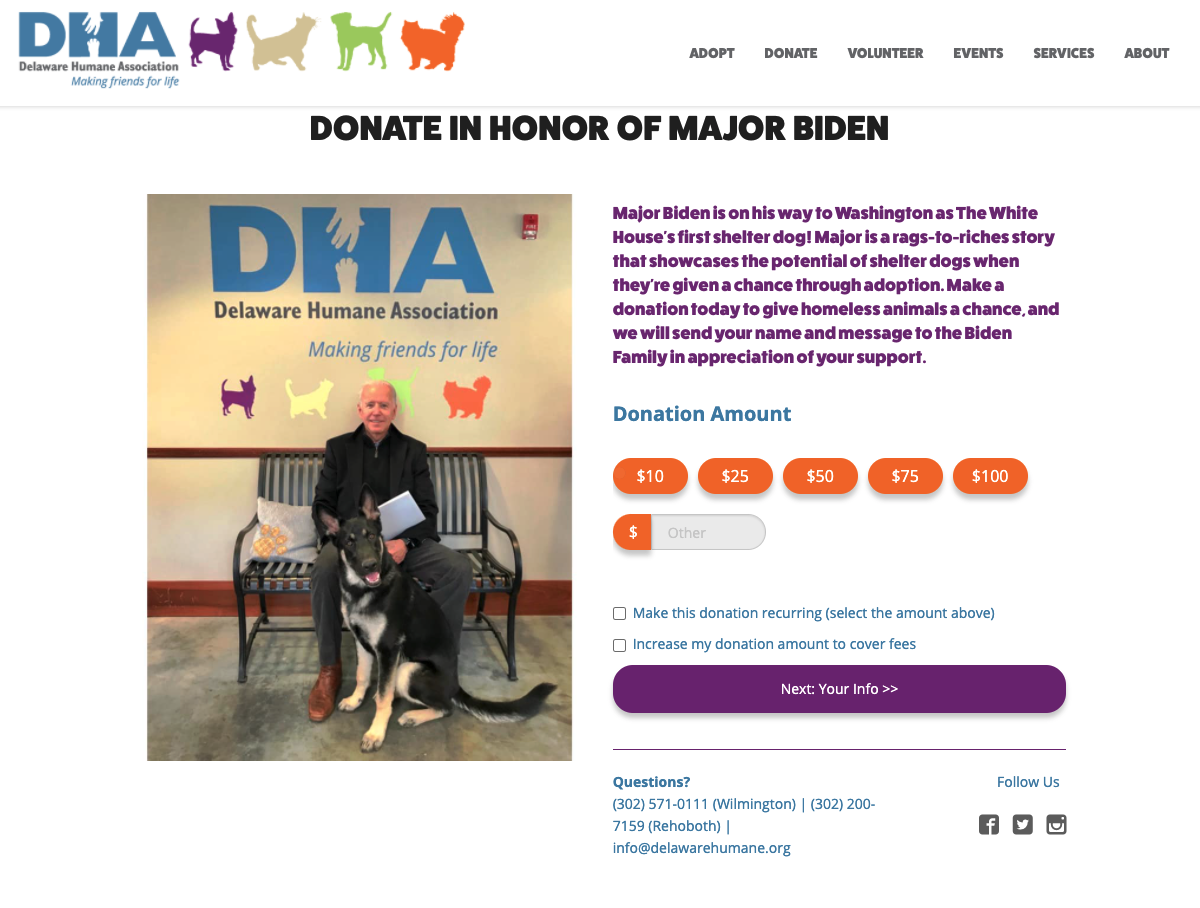 Daniel Condoluci-Smith led the team that coordinated communications for DHA and was extremely happy with Salsa’s willingness to go the extra mile to make sure their event was a success.

“It was really nice of Salsa team members to reach out before the event, offering their personal phone numbers to handle support during the planning stages and the big event. It was great to have them in our corner.”

Upon making a successful donation, participants were emailed links to join the big zoom meeting. The marketing automation was also handled by Salsa and kept things organized and efficient.

When DHA started dripping out their plans online, they found many more people interested in bringing attention to their cause. Within 24 hours, DHA gained hundreds of donations, and before the weekend was over they had well over their initial goal of 1,000 individual donations.

As the news kept reporting the event and social media influencers picked up on it, DHA kept sharing the love and pressing the importance of rescue shelters and the critical role they play in our communities. As a result, DHA was contacted by other shelters around the country who themselves had experienced increased attention. Rescue adoptions increased, as did donations to those other shelters.

Singer, songwriter, musician (and all around amazing artist and pet lover) Josh Groban got involved. Zoom offered to be a partner, and eventually TODAY Show Lifestyle Contributor Jill Martin offered her talents and to host the call. Before long it became clear DHA would reach their initial goal of raising $10,000.

When all was said and done, more than 7,000 people joined the Indoguration™ zoom call, north of 12,000 individual donations were made, and DHA raised more than $200,000. People are still watching the YouTube Livestream replay and enjoying the vocal stylings of Mr. Groban who sang a new version of the classic “How much is that doggie in the window.” 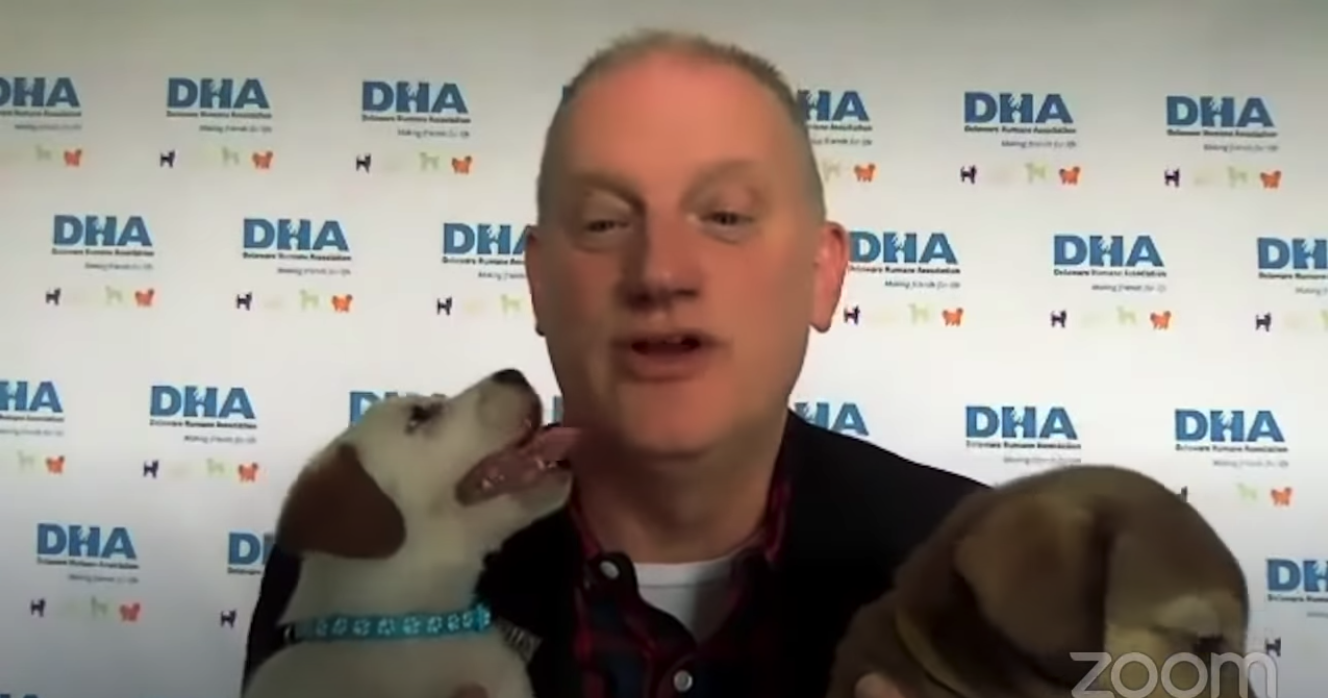 Often times nonprofit organizations don’t attempt ambitious events because they believe they’re too small or won’t have the support they need to pull off such an event. The Delaware Humane Association is just 45 people, including full-time and part-time staff, veterinarians, and vet techs. They are amazingly busy with their normal work placing nearly 2,000 animals per year. DHA could have easily decided this event was too much work and called it quits, and over the course of several months, they had many opportunities to do so. But they organized their volunteers, leaned on partners like Zoom and Salsa, and they got it done.

The extra funds will come in handy for the shelter, which also offers other unique services in their local community. They have a food pantry serving low-income residents and One Health Delaware, a health clinic staffed by volunteer nurses and doctors from a local university that merges people and animal health. Residents in low-income zip codes can bring their cats or dogs to get a vet visit, and while their pet is being taken care of the people see doctors and nurses for their own health screening. All the fees are covered by grants and generous donors, which takes the affordability issue out of the equation when deciding what type of care your pet needs. It also provides for much better health outcomes for the people in the program.

Salsa is proud to work with organizations like Delaware Humane Association which play a critical role in our community and who are making the world a healthier place for our people and our pets.

And they now hold the world record, certified by Guinness Book of World Records, for the most pets on a Zoom call...5,000 pets!