Engage and change the world. That’s Salsa’s vision for social good organizations and the reason we get so excited when they execute successful advocacy campaigns using our software. In this article, we’re taking a closer look at a few of the early planning stages in any advocacy campaign - identifying the target who can bring about the change you desire and the people who influence that target. This is called “mapping your advocacy campaign” because we are developing a visual map of the people who will help us and how they relate to one another.

It’s not enough that we go directly to the target and lay out our case. Sometimes the person we need to convince isn’t going to listen to just one singular voice. We need to point our advocacy at the people who influence our target too. Their voices will lend credibility to our campaign because they are trusted friends and colleagues of our target and their opinions matter.

Remember, you can download the advocacy campaign planning worksheets in the appendix of Salsa’s Complete Guide to Digital Nonprofit Advocacy Campaigns and follow along with this post while you create your own advocacy campaign maps. 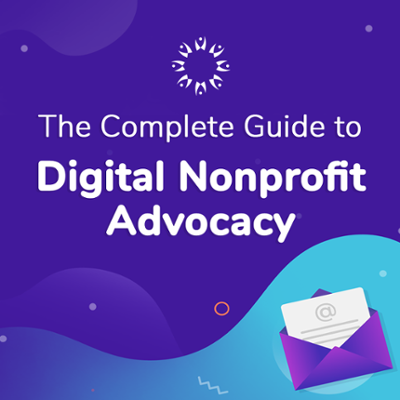 How to Form an Advocacy Campaign Target Profile

The success of advocacy campaigns can sometimes be measured in months or even years, so it’s important to focus on the right target before your campaign gets started. With the campaign goal in hand, the person who can bring about the completion of your goal usually comes into focus quickly.

For example, if your goal is to get a new law passed in your state, your target will likely be a state legislator like a state representative or state senator or possibly the governor. Pointing your advocacy at the local Congresswoman is not going to be effective since she is a federal legislator and does not get involved in the process of passing state laws. She’ll be on your influencer map for that campaign, but she should not be your main target. However, if your goal is to allocate federal research funding for a new medical treatment - that’s where your Congresswoman would be the target and your state legislators would be likely influencers.

Knowing the structure of your federal, state, and local governments is key to choosing the right target. If you’re not sure who makes the decisions call your local representatives and ask. You can also call the local high school government teacher or the chair of the political science department at a local university or college.

If you’re following along with our advocacy campaign guide, you can use the Advocacy Campaign Planning Worksheet on page 33 to complete this step.

Questions to Ask When Developing a Target Profile

When you’ve identified the target, you’ll create a profile that tells you more about what motivates your target. Understanding how he thinks and what he cares about is key to creating the messaging that will move him to act on your behalf. It’s also just human nature that we engage more deeply with people who share common interests. The profile will help determine where there is common ground between your team members and the campaign target.

Since legislators are public officials, much of this information will be available online or in past news reports. Votes on legislation will also be a matter of public record. If your target is a corporate executive, it might be a little bit harder to track this information down, but the internet is usually your friend here. You can also check on social profiles, company documents, even publish investor phone calls, where the CEO or executive team usually lays out their quarterly focus.

Don’t worry if you can’t answer all these questions right away. The next step is to identify the people who influence your target, and oftentimes these people can fill in the gaps of your target profile.

Identify the People Who Influence Your Target

After you have identified your target you’ll work on identifying those people who influence your target. These are the close friends, family members, colleagues, and trusted advisors to your target. They are whom the target will go to for advice or to bounce ideas off. Having these people say good things about you and your campaign will positively influence the target and increase your chances of success.

Make a list of the influencers and put it with your target profile. Again, if you’re dealing with legislative advocacy, it helps to understand the political hierarchy. Elected officials at the level just below your target are usually good people to put on your list as influencers. Federal legislators often heed the advice of state and local elected officials because they are typically more in tune with what’s happening at the local level.

For corporate advocacy, you’d look at board members who have influence over or with the CEO or executive level staff. You might also add key vendors or suppliers who have long relationships with your target corporation. Customers and advertisers can also be added to your influence map. In 2018, a group of high school students was successful in steering advertisers away from a major television news outlet as part of an advocacy campaign performed mostly over social media.

What to Do If You Don’t have a Direct Relationship with your Advocacy Campaign Target?

Even if you don’t have relationships with your target or her influencers, it’s still important to make a list of who they are and how they relate to the target. This will be used in several ways throughout your advocacy campaign.

How to Map Your Advocacy Campaign

With your target and influencers list in hand, you can now create your campaign map, the actual visual representation of your advocacy campaign. The image below shows an example campaign map with the campaign target in the center and the influencers around him. Page 32 in Salsa’s Complete Guide to Digital Nonprofit Advocacy is a blank worksheet you can use to map your own campaign.

Put your target in the center of your own map and start to add your list of influencers around your target. The people with the most influence on your target should be placed in the boxes the closest to the target. Make sure to write the person’s name and position. That information will be helpful later. 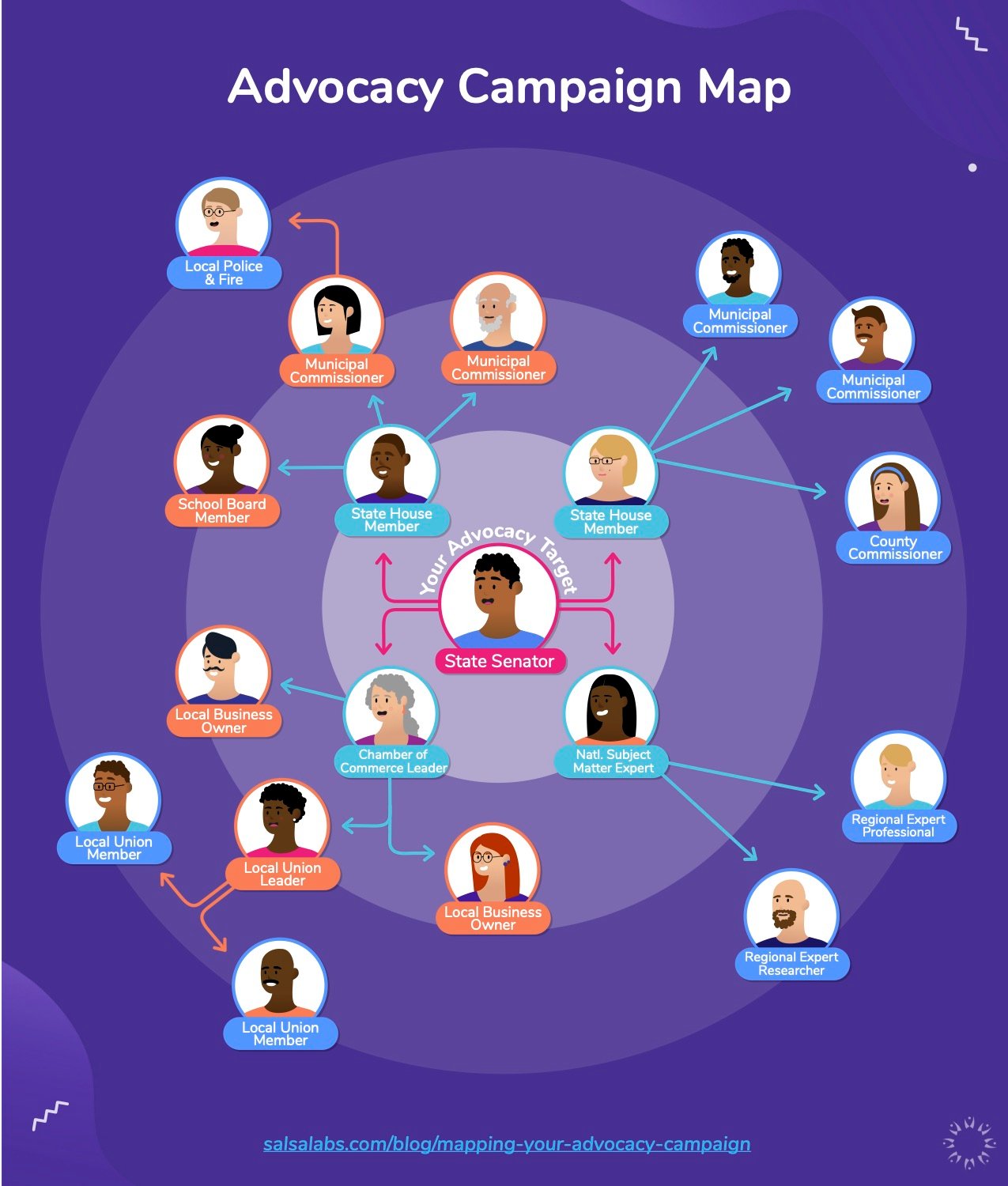 In the example image, the target is a state senator. From our research and answers to questions in the target profile, we determine that he has four main influencers on whom he relies for advice and information:

Don’t stop there. Take some time to extend your map out at least one more level. We highlighted the people who influence the influencers too. In the example, we added the local business owners who network with the chamber of commerce leader. We added a few researchers on whom the professor relies for their own information. We added the local elected officials who talk to the statehouse members (school board, local commissioners), and even the local police and fire department members; all of whom have influence over those local elected officials.

Documenting the Spheres of Influence In Advocacy Campaigns

Keep in mind they do not need to be concentric rings. One person may have much more influence than another, in which case the sphere would lean toward that person. It is entirely possible that your target trusts just one or two influencers. Your first sphere would lean heavily toward those two people on the map.

Continue to fill in the list of influencers and whom they influence and draw your spheres as you move out from the center of your circle until there are no more people to list. There is no right or wrong number here. Your campaign may have 5 influencers or you may have 50. Only you and your team can judge what the right number is for your campaign. When you build your campaign team you can make that decision together based on the resources you have available.

Using the Map to Help Build Your Advocacy Campaign Team

The visual map is a great resource for building your advocacy campaign team because it highlights areas where your relationships are weak.

Let’s refer back to the example in the map image with the state senator as our target. We identified the chamber of commerce president to be a significant influencer on our target but no one at our organization has a relationship with the chamber president. We don’t just move on because we would be missing a chance to have another voice on our side. Instead, when we build our team, we’ll want to invite people who believe in our cause and who do have a relationship with the chamber to make those introductions for us.

In a way, you’re repeating the process of profile building, except you’re doing it at a slightly lower level. And you’ll keep doing this until you’ve got team members who are influencers themselves or who can connect you to the influencers.

The most successful advocacy campaigns are actually those which are made up of dozens of mini-campaigns to influencers with the goal of having those influencers convince the campaign target on your behalf. Pointing your advocacy tactics at your target AND their influencers will build a force multiplier effect in your campaign and increase its chance of success.

Keep the campaign map handy and refer back to it as you develop messaging. If you’re using a smart engagement platform like Salsa Engage, you can plan and organize your mini-campaigns to influencers with email series, petitions, click to call, text messages, and other targeted actions. The goal of these mini-campaigns is to educate your lower-level targets and get them talking about your campaign with your final target. The more people your target hears from the better.

Post a note on Salsa’s Facebook or LinkedIn pages and let us know how you’re using our advocacy guide and mapping worksheet on your next campaign.

If you want to unlock more strategic fundraising tips, check out these additional resources: 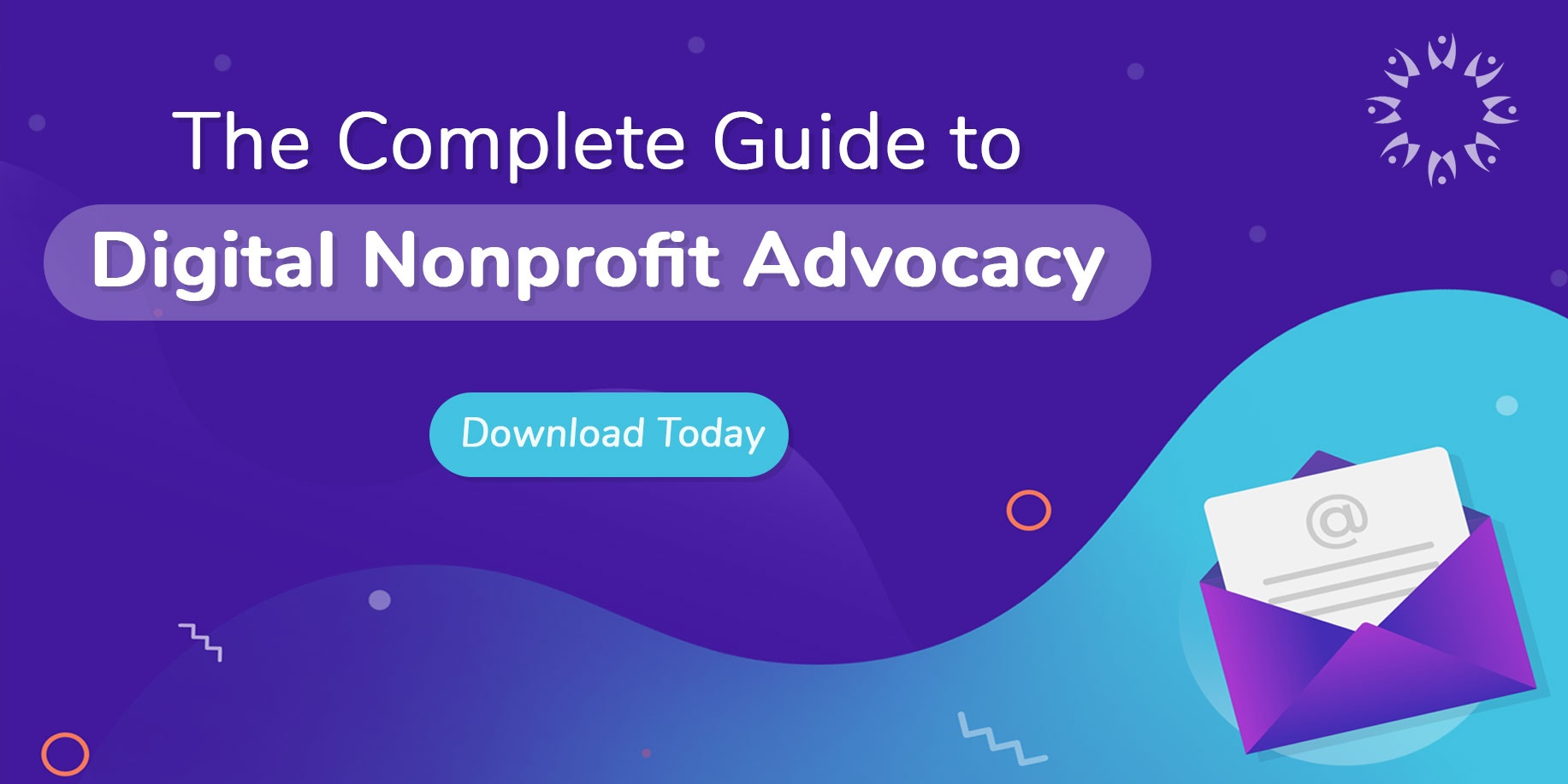