The Nonprofit Ladder of Engagement 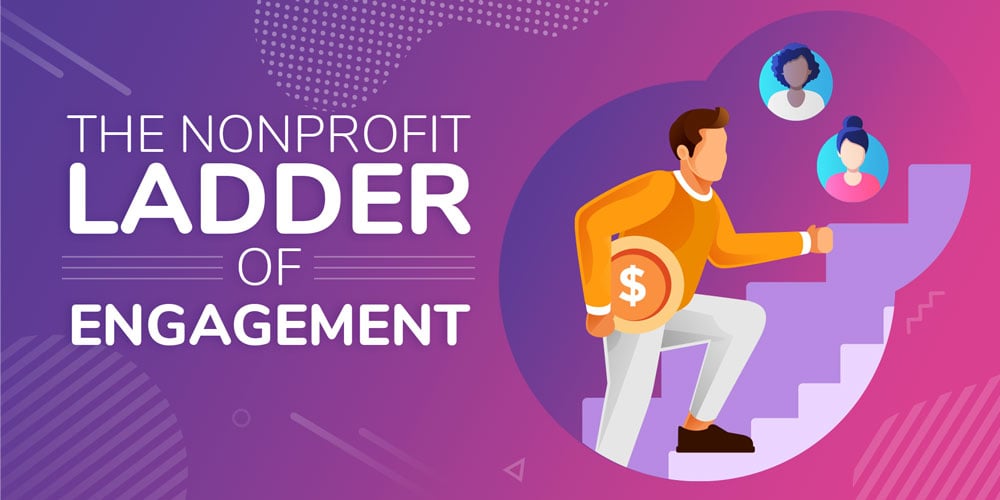 Fifteen years ago, a nonprofit could survive without a website by doing a direct mail piece once or twice a year or just relying on walk-in traffic and a few in-person events. You’ve probably already come to the realization that those days are over and the world is relying more heavily (and sometimes completely) on virtual outreach. As such, we’re all competing for what seems to be a more limited pool of attention. Today, you need to keep your audience engaged or risk losing them to another cause. The nonprofit ladder of engagement is the tool you need to find those supporters and keep them coming back for more.

This is the first of two articles focused on the nonprofit ladder of engagement, what it is, and how your nonprofit can use it to find supporters and turn them into dedicated advocates for your organization.

What Is the Nonprofit Ladder of Engagement?

A ladder of engagement is a term used to describe the levels of interest and participation among a group of people. The ladder has multiple rungs, with the lowest rung representing the least level of interest, or someone who knows very little about your cause. The highest rung represents a more active level of participation and engagement with your cause.

I was originally introduced to the term nearly two decades ago while volunteering with a health-based issue advocacy organization in Southern California working to influence congress and to obtain research funding for their cause. For them, the ladder started at the lowest rung with someone who signed a paper petition at an event. At the highest rung of the ladder were those people who agreed to join the organization on a trip to Washington D.C. to advocate in person.

Not too long after that, I started seeing the term more frequently used in charitable circles. Thought leaders like Beth Kanter and Allison Fine blogged about the “nonprofit ladder of engagement” in relation to social communication and they included similar notions in their books. One of my all-time favorite reads on the subject is a book from 2012 titled Measuring the Networked Nonprofit by Beth Kanter and Katie Delahaye. To this day, it is probably the best advice on how to think critically about your online communication and, more importantly, how to measure it. Many nonprofit executives think they need to be on Facebook or Twitter or Pinterest because that's what their friends tell them. But few take the time to really learn how to engage or how to measure what is working and what is not. Kanter and Delahaye's book dives into the metrics you need to know to understand whether you're communicating effectively, and if you are not - how to fix that.

Part of communicating effectively is to understand where your audience is in its relationship with you and your nonprofit. Using a ladder of engagement can help us visualize that relationship.

How People Enter the Nonprofit Ladder of Engagement

Traditionally, a person would enter the nonprofit ladder of engagement at the lowest rung when they were dragged to an event by a friend or family member that supported your organization. That facilitated the most common goal of moving members to a higher rung where they would provide the most value to your organization. The thinking was that a recurring donor is more valuable than a one-time donor who is more valuable than a volunteer who is more valuable than just someone who signs a petition. That line of thinking also made it easier to track things in your nonprofit CRM because the process was linear. Start at the bottom and work the person up the ladder with a standardized set of communications.

But now, with more instant virtual communication, it’s possible for your audience to enter the ladder at different stages. Social media and distributed organizing tactics can bring nearly instant and high levels of familiarity with your organization allowing a person to move from the lowest rungs to the highest before you even have a conversation with them. Some go from newbie to vocal advocate in the span of just a single zoom webinar.

Also, with ever-increasing competition for our attention, some of your supporters enter the ladder and don’t change rungs at all. They either don’t have the time to get more involved or are happy with the level of engagement we share with any one particular organization. And that’s okay.

At a past event for a legislative effort, one person told me they only 15 minutes a day to give the cause. We got her signed up using a simple targeted action calling tool and she made hundreds of calls for us over the life of the campaign. She was our most ardent supporter. Someone who was focused only on moving supporters up the ladder to a higher state would have likely ignored that person as a potential volunteer, and chose to spend their time cultivating a supporter who could give more time. That would have been a terrible mistake.

It follows then that our goal then is not necessarily to move a supporter from the lowest to the highest rung, but to maximize their time at whatever rung they occupy, and to make sure they too are growing and benefitting from the relationship with our organization. It’s a two-way street!

To keep supporters engaged no matter where they are on the ladder, you must have a deep understanding of your audience, what motivates them, and what they are looking to achieve in their relationship with you. In some cases, the audience member might not know that yet themselves. But that doesn’t stop us from planning, and we do that by creating nonprofit audience personas and thinking about our internal organizational goals.

For-profit businesses call these buyer personas, and while your organization may not be selling a physical product or service, you are competing for that person’s time, attention, and potentially their funds.

A nonprofit audience persona is therefore a profile of that organization’s ideal supporter. It is a collection of the traits and characteristics of a person most likely to interact with our nonprofit or the person we wish to interact with us.

There are myriad articles written about how to create audience personas or supporter profiles. Most of them are actually cloaked in advice on how to build a donor persona, which is a good thing to do when you are focusing on marketing solely for donations. But for your overall communications, you must look at your audience in a more holistic way. Focusing only on donor personas would be limiting your pool only to potential donors, and, like the person in the story above who could only call for 15 minutes a day, you might miss out on those people who don’t intend to contribute financially but who could otherwise be very vocal advocates for your nonprofit.

Vanessa Chase Lockshin provides a great base for creating your audience persona in this fantastic article about nonprofit storytelling.

To start, try not to get too bogged down in minutiae, instead focus on motivations. Why would someone want to engage with your organization, and if they did, what would they learn? Describe who that person is, what they look like and care about. Put a name to this fictional person to make it more real.

For an organization trying to affect climate change legislation, a quick audience persona might look something like this:

Climate Carrie is in her 20’s. She cares deeply about our environment and about protecting our natural resources. She wants to spend her time and energy on important endeavors and understands the threat that climate imbalance will pose in her lifetime. She doesn’t get bogged down with statistical data or climate models, but she can quote Thoreau and Frost with passion, and gets involved with local groups on recycling and composting efforts. She spends 3 hours a day on her phone and prefers text messaging or Whatsapp over email or Facebook. She doesn’t have a ton of disposable income, but she’s passionate for the cause and gives her time when she can.

If we're using a nonprofit CRM to track our contacts and where they are on our ladder, we can start to think about the how we might use different language to motivate and engage each person at the different rungs.

What does success mean to your organization? Spend some time thinking about your goals. Not your mission, but the individual goals that will help you accomplish your mission. Start with just one or two.

Is it changing the law or passing an important piece of legislation? If so, you’ll need informed volunteers willing to spend lots of time writing elected leaders, marching in rallies, or maybe even getting arrested. Does it mean getting funds for a new computer lab so you can keep at-risk kids off the street? If so, your audience profile ought to include people with deeper pockets than Climate Carrie.

Organizational goals and audience personas work hand in hand. As your goals change, your personas should change with them so that you are attracting and engaging with people who are most suited to your cause and who might themselves gain the most satisfaction from helping you. It’s a mutually beneficial relationship.

Take a moment and think about your goals and your ideal supporter. Think about the type of person you wish would show up at your door right now. Write that down, commit it to paper and put it up on the wall where you can see that every day. It will work it’s way into everything you do; everything you write, and in your conversations with people when you talk about your organization.

Now, let’s create your own nonprofit ladder of engagement.

Creating Your Nonprofit Ladder of Engagement

Now that you have a clear picture of your goals and the supporter who will help you accomplish them, let’s create your nonprofit ladder of engagement. I’ll continue with our fictional example.

Organization for International Change (OIC) exists to bring about a fracking ban in its home state, which neither has laws encouraging nor preventing it. Nearby states have passed similar fracking bans so legislation exists that you can draw upon, but state legislators don't’ seem to be interested one way or another... yet.

Okay, the last one isn’t really a goal. But let’s leave it there for our own motivation. :)

OIC has several audience personas they need to consider for their outreach. Climate Carrie doesn’t actually come in until goal #2. While OIC is working to bring her to the table they must also look for Lawyer Larry who is going to help with goal #1. Then they’re going to work on Sally Senator’s audience profile so they understand how to communicate there. Finally, there’s Voter Vonny who OIC will need to help to motivate Senator Sally. Each of them has their own motivation for getting involved with the campaign and if they’re going to stay involved they have to get something out of this too.

And no, #5 is not motivation enough to sustain everyone through this journey. You have to think more deeply about providing that continued motivation throughout your campaign.

Now that you’ve created your ladder, it’s time to work on the specific communication that will motivate people to get involved. Read our second article in this series titled Communication at Every Level on the Nonprofit Ladder of Engagement and learn more about digital marketing for nonprofits and how to use audience personas to motivate your supporters to action.

If you want to unlock more strategic fundraising tips, check out these additional resources: